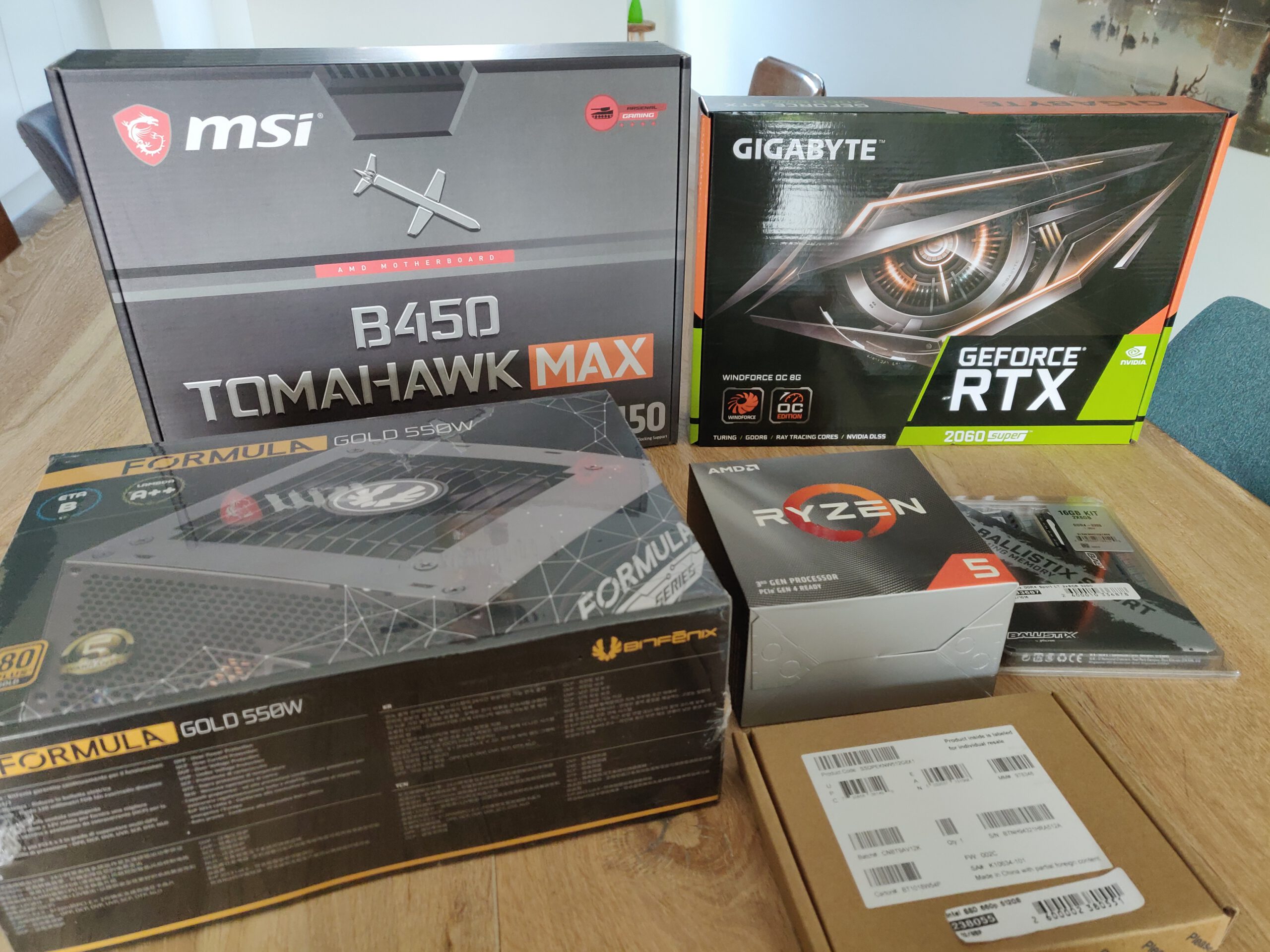 Inside the cabinet a Windows 10 PC will be installed: this is the heart of the virtual pinball machine. Depending on the playfield monitor we choose (we are thinking of getting a 43″ 4K monitor) this PC has to be quite powerful. Therefore we will use 16GB of RAM and a powerful GeForce video card. Below is a complete list of the PC components we bought: 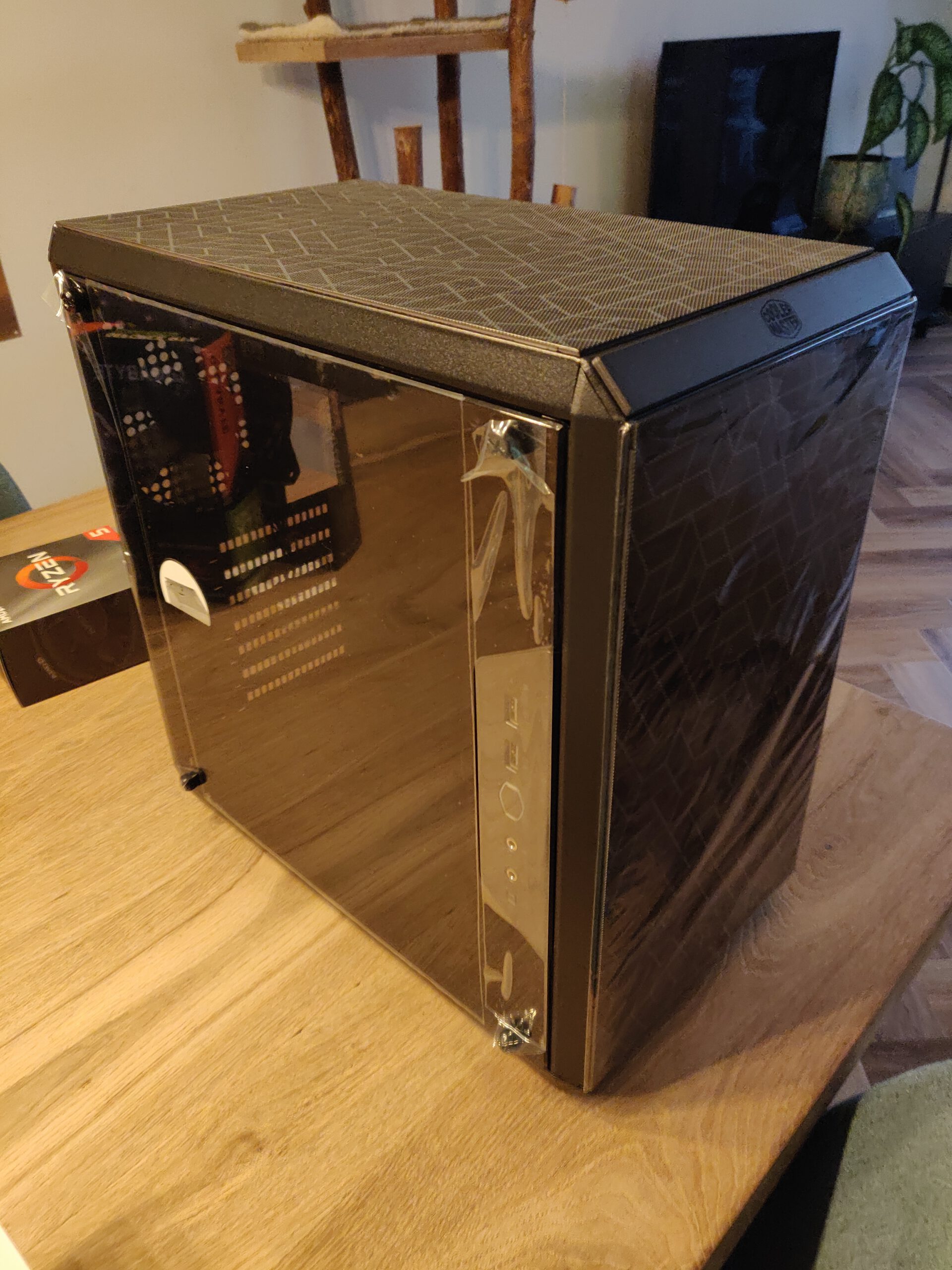 ↪ The case of our choice is a fairly compact one made by Cooler Master. The reason we choose to put the computer hardware in a case is to protect against dust or falling objects. Cool detail is the transparent side.

↪ Luckily the MasterBox comes with a manual that guides us through the process of installing all hardware. First we need to put in the PSU. 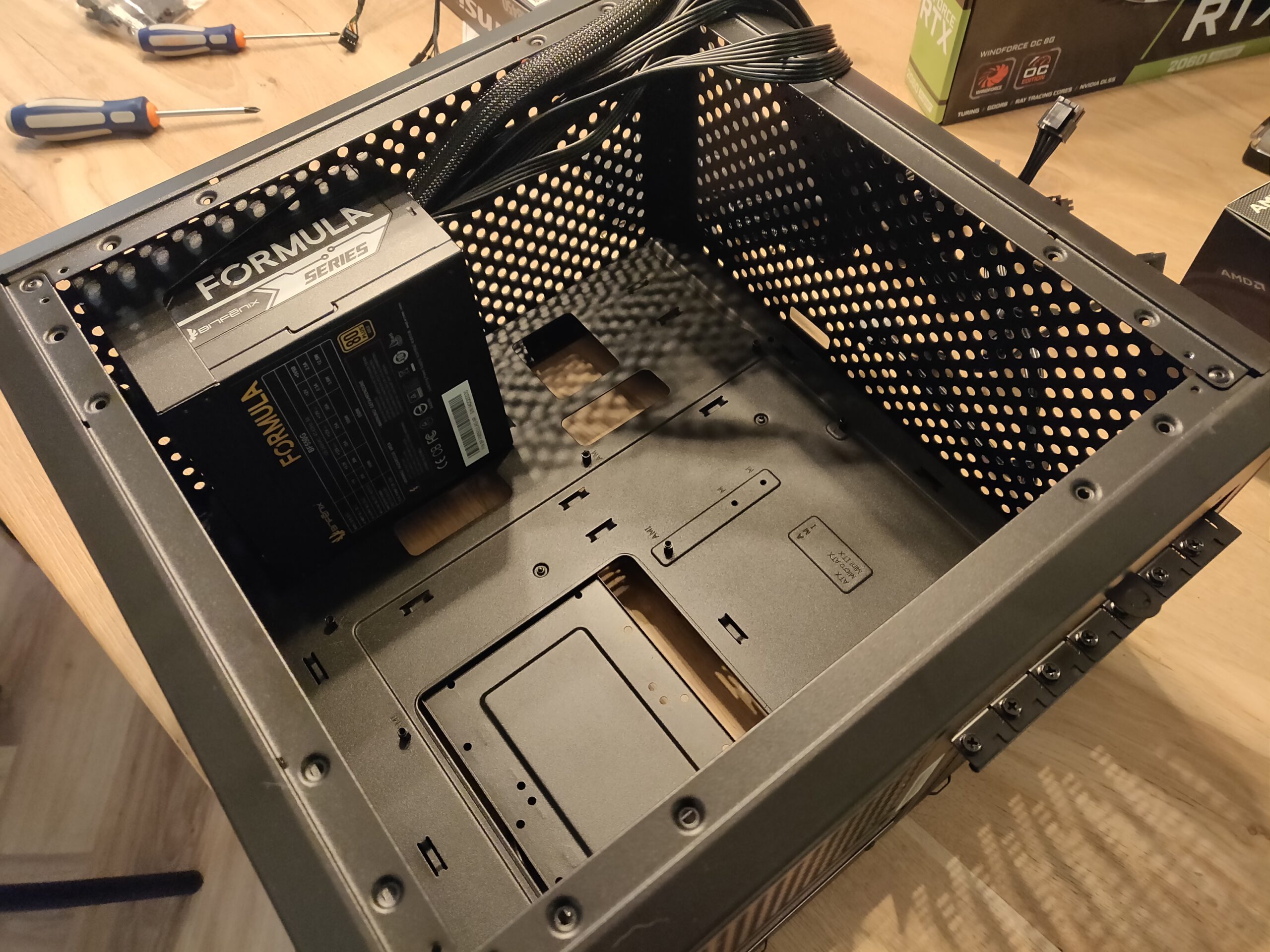 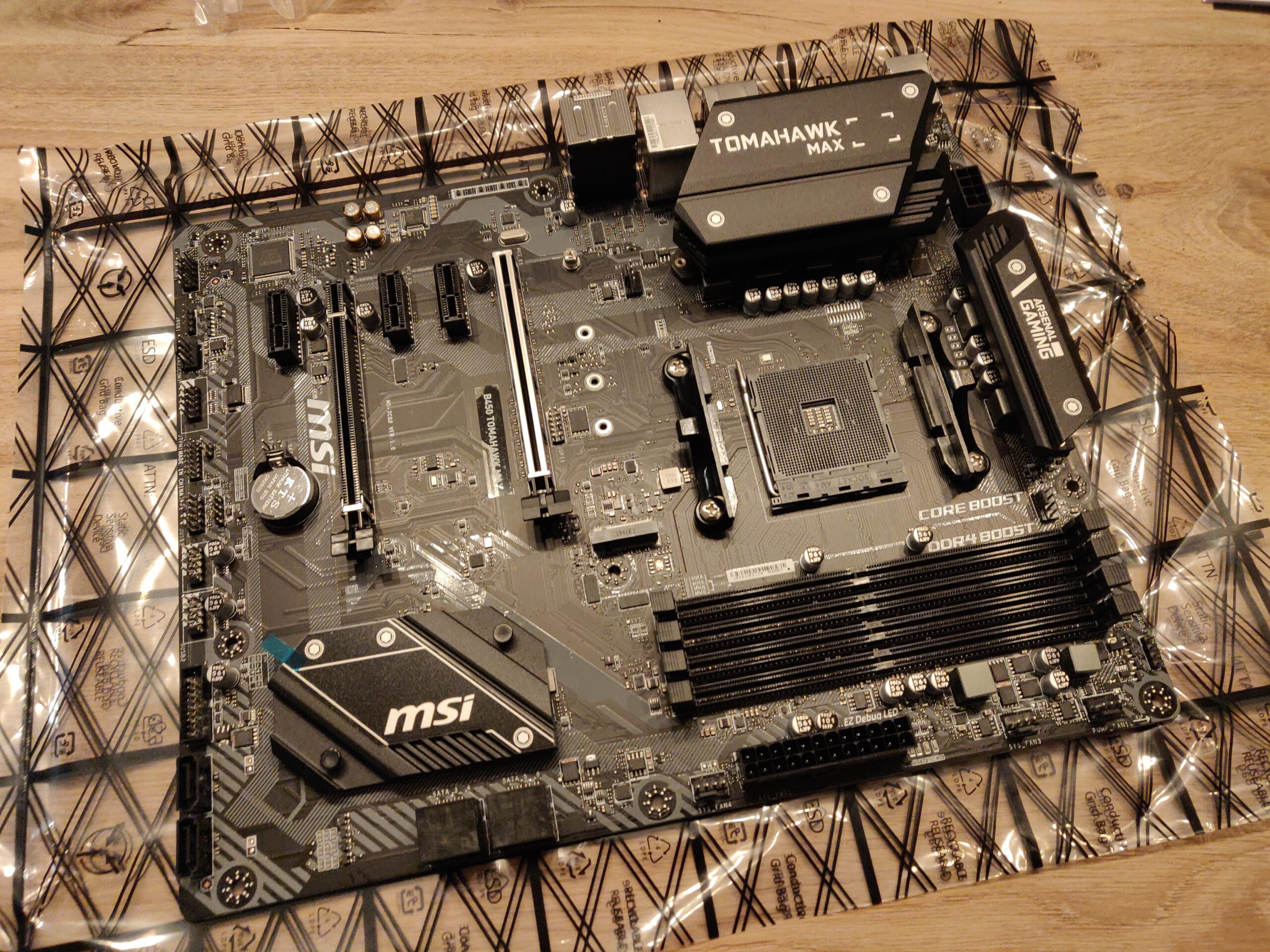 ↪ Next up is the motherboard. 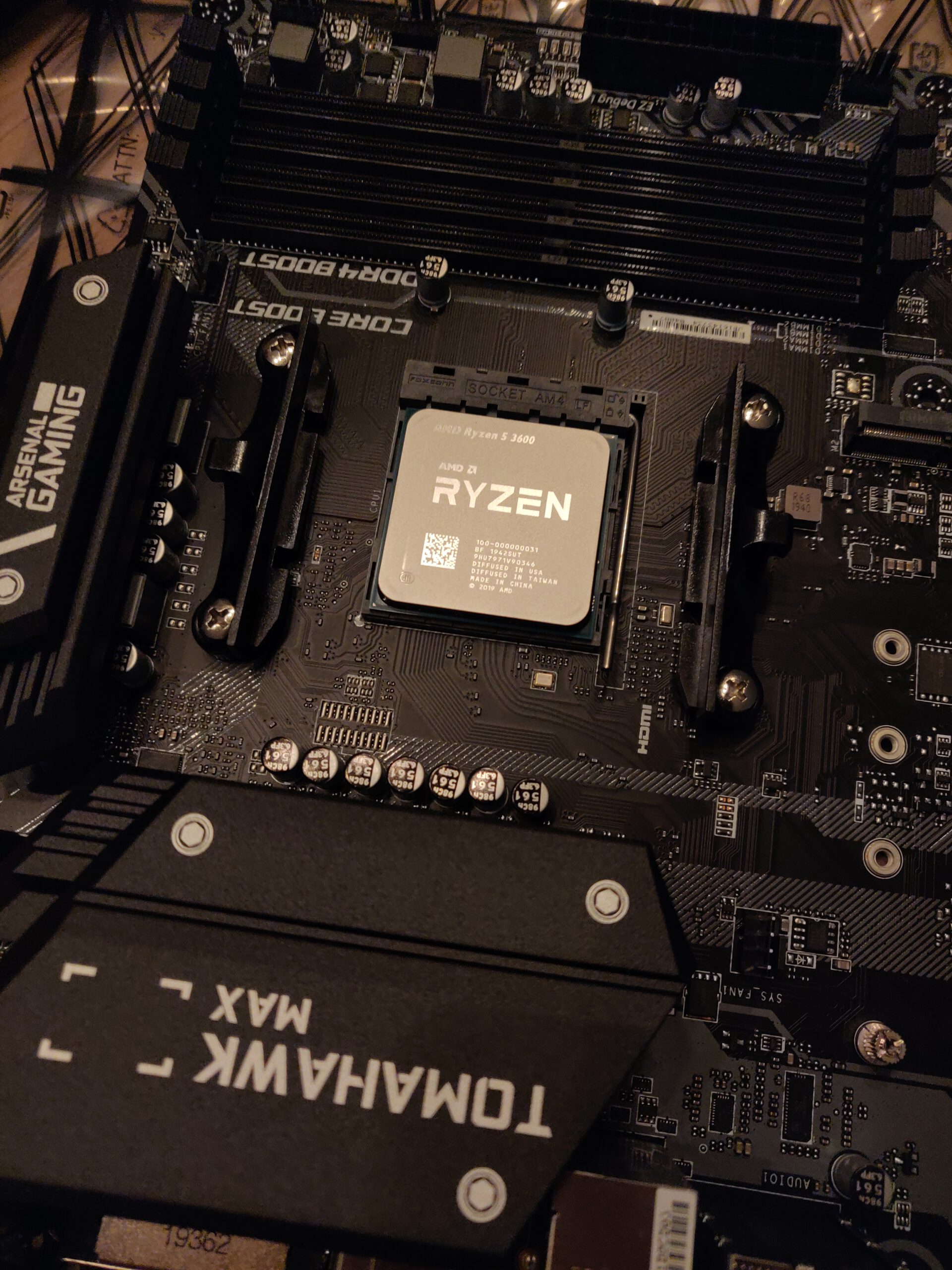 ↪ But before we can put it in the case, we need to install the CPU… 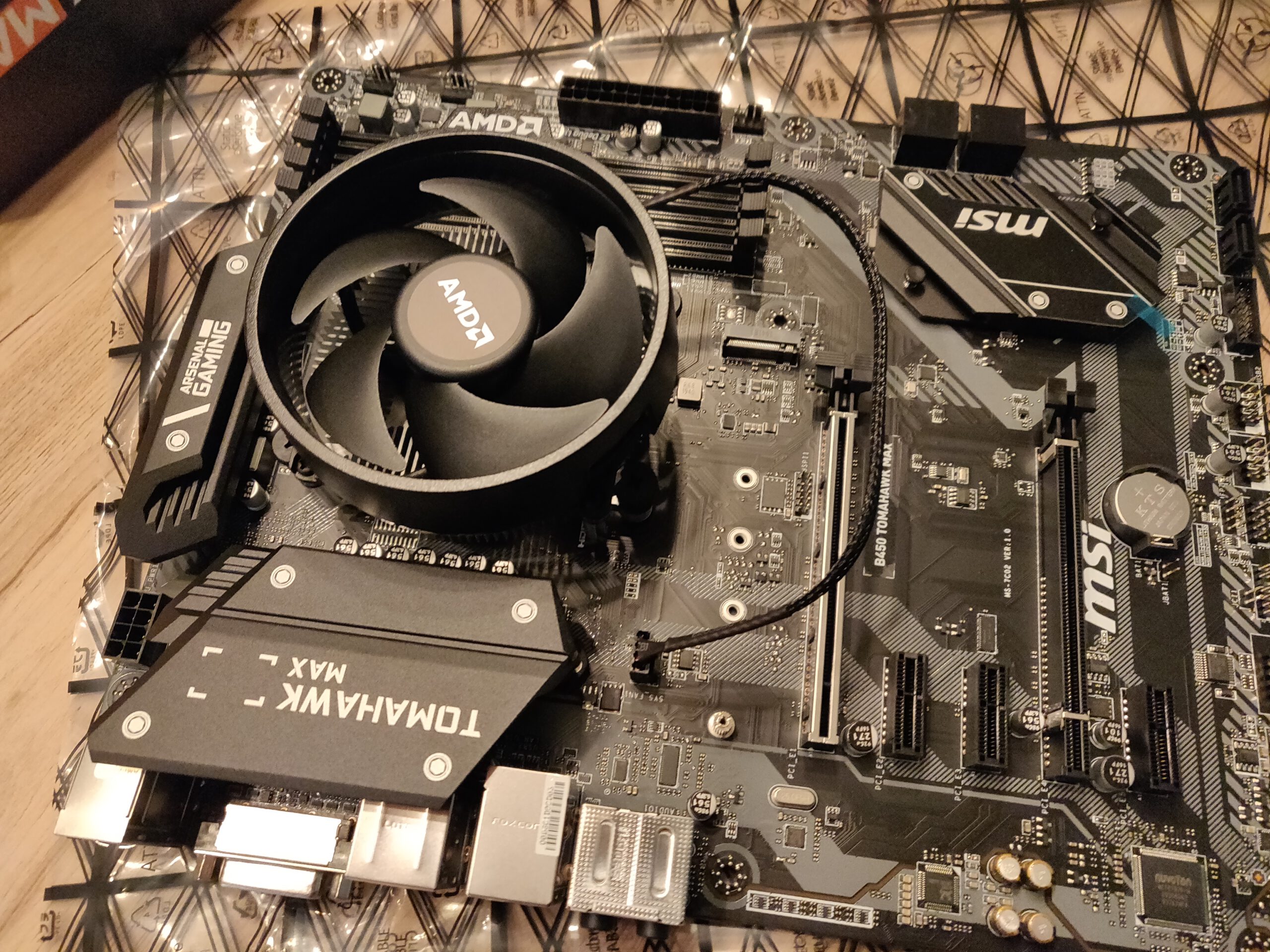 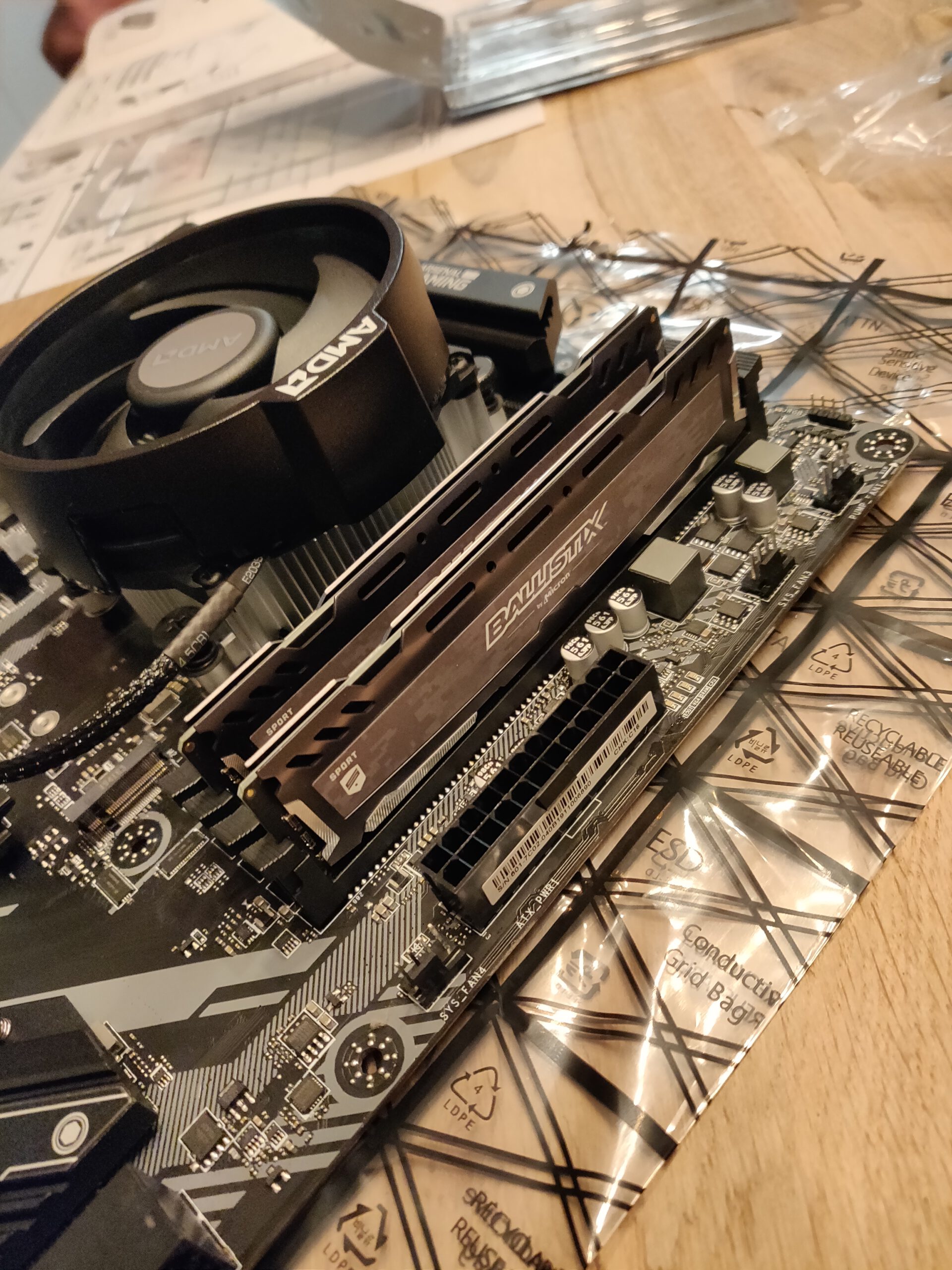 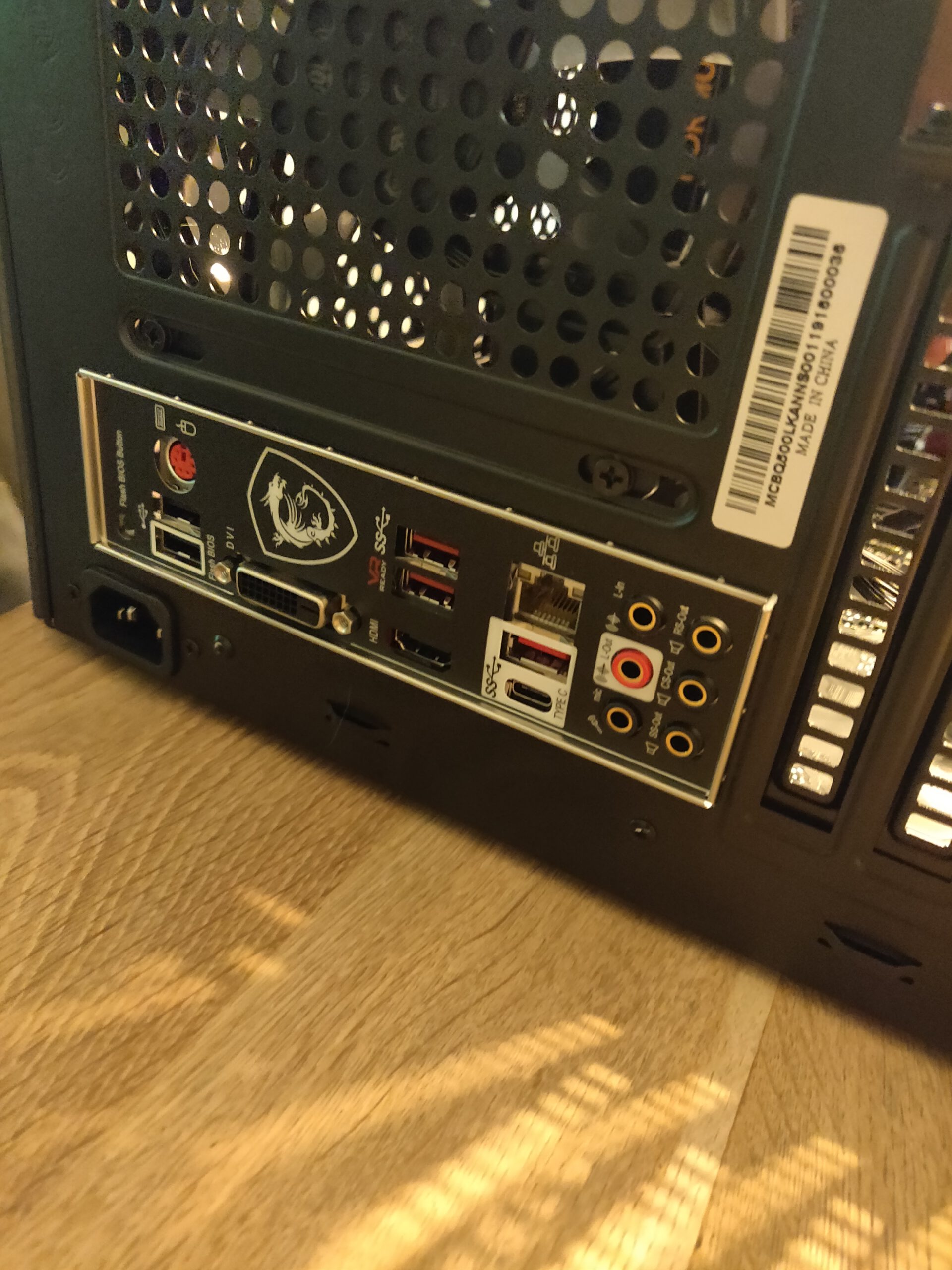 ↪ When placing the motherboard inside the computer case we have to make sure that we align the ports correctly. This was easier said than done, it’s a tight fit! 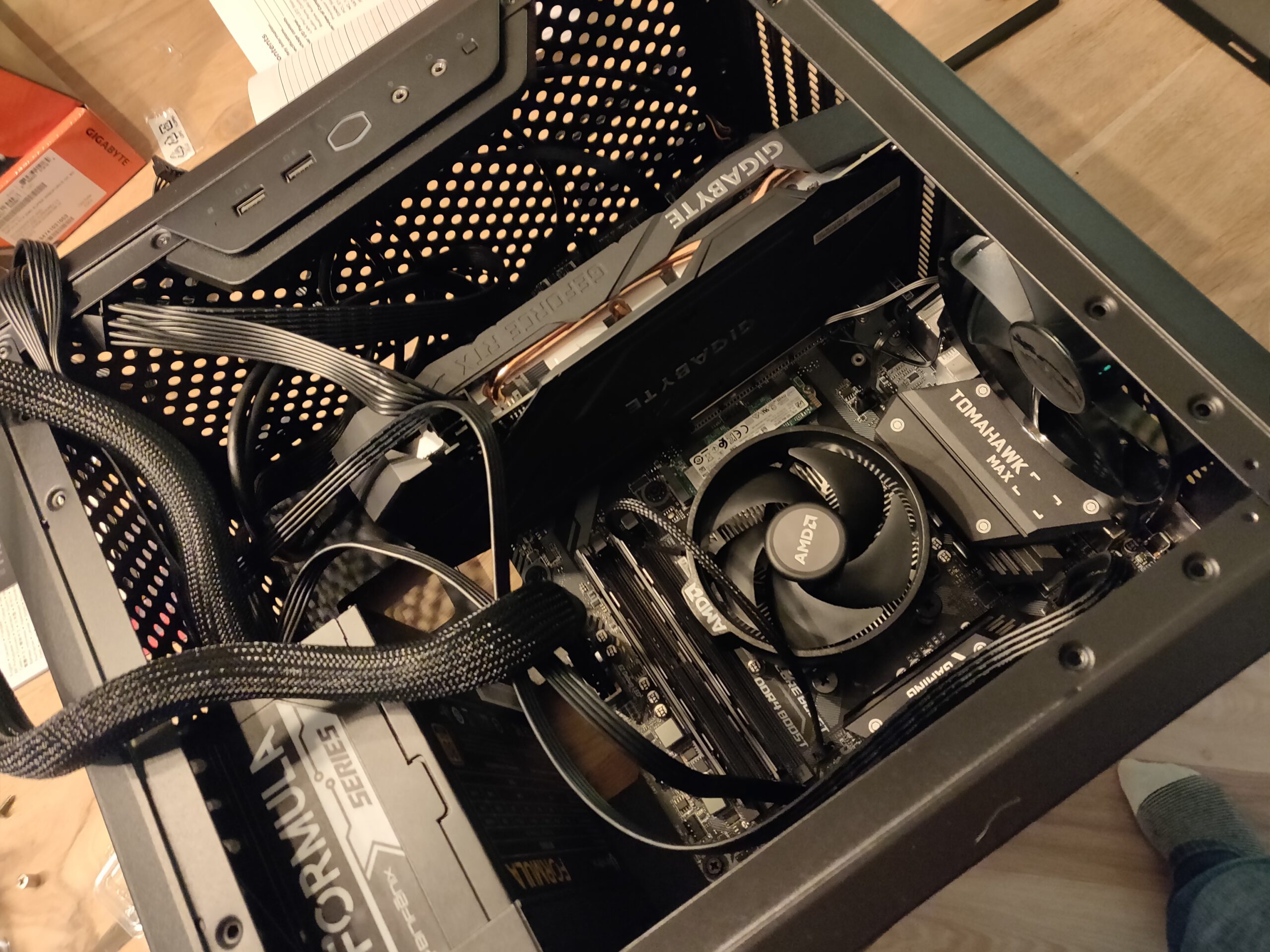 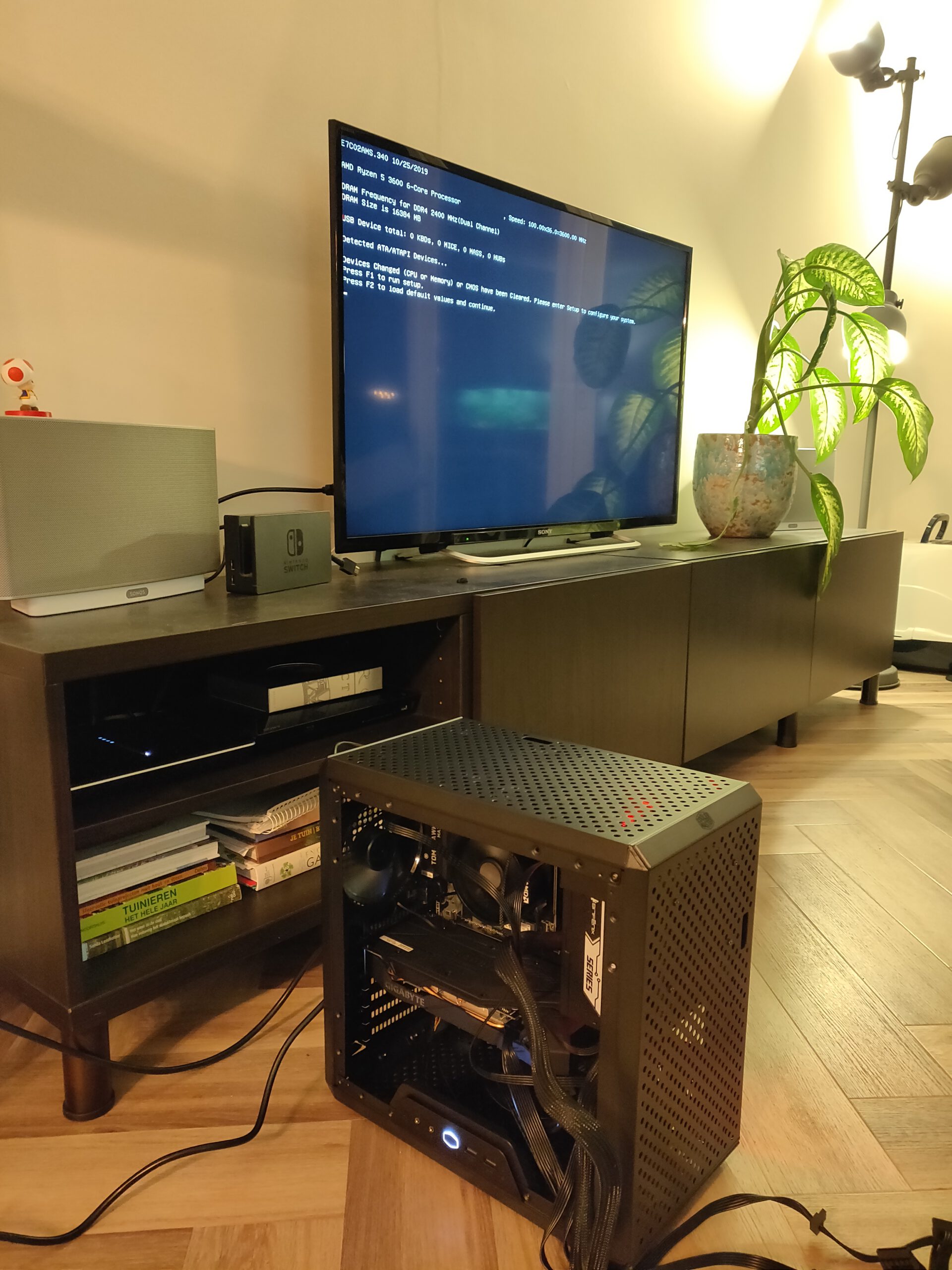 ↪ Before rearranging the cables and closing the case we make sure that the computer is working. Looks like we installed everything correctly! 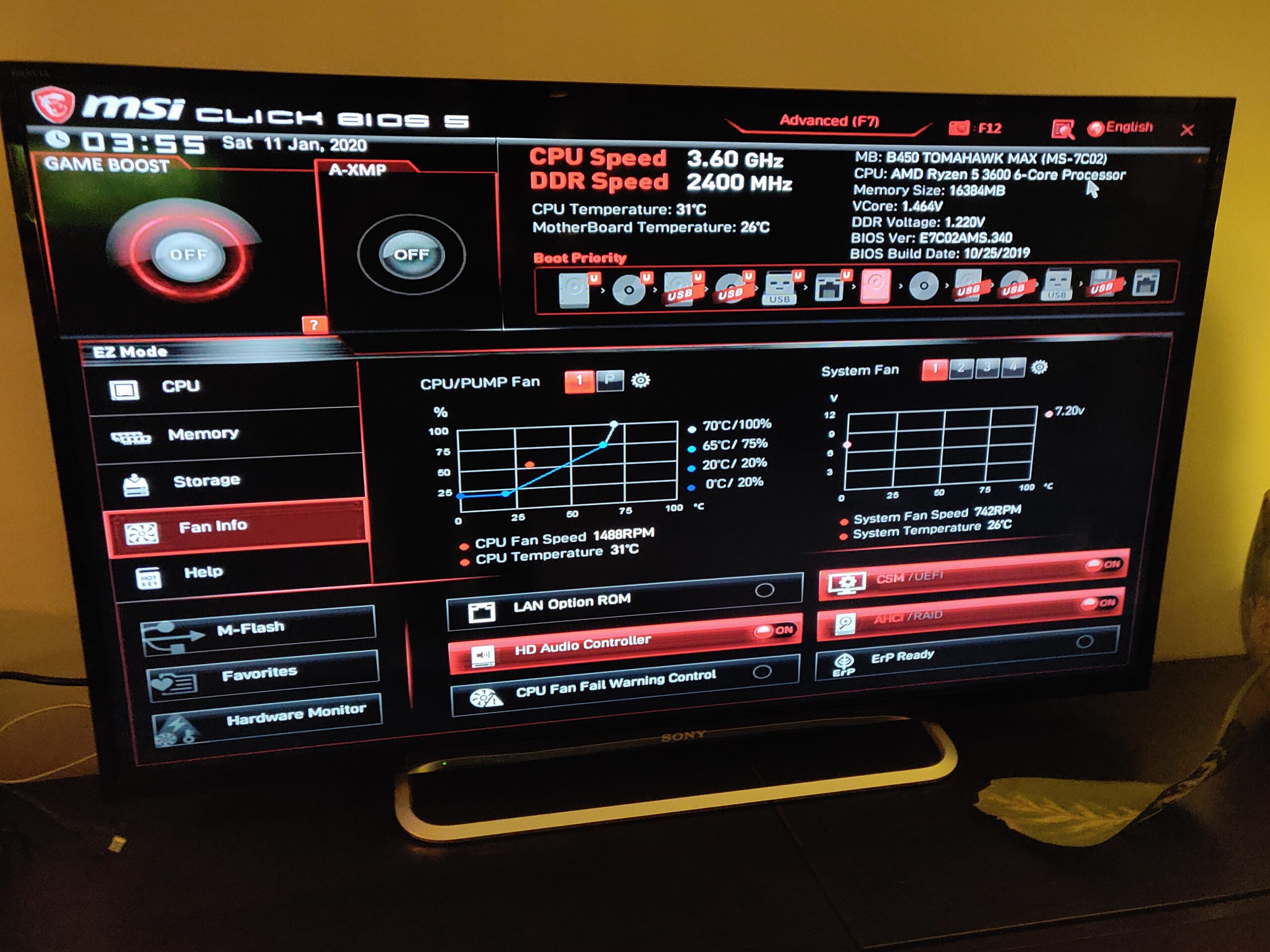 ↪ Inside the computer’s BIOS 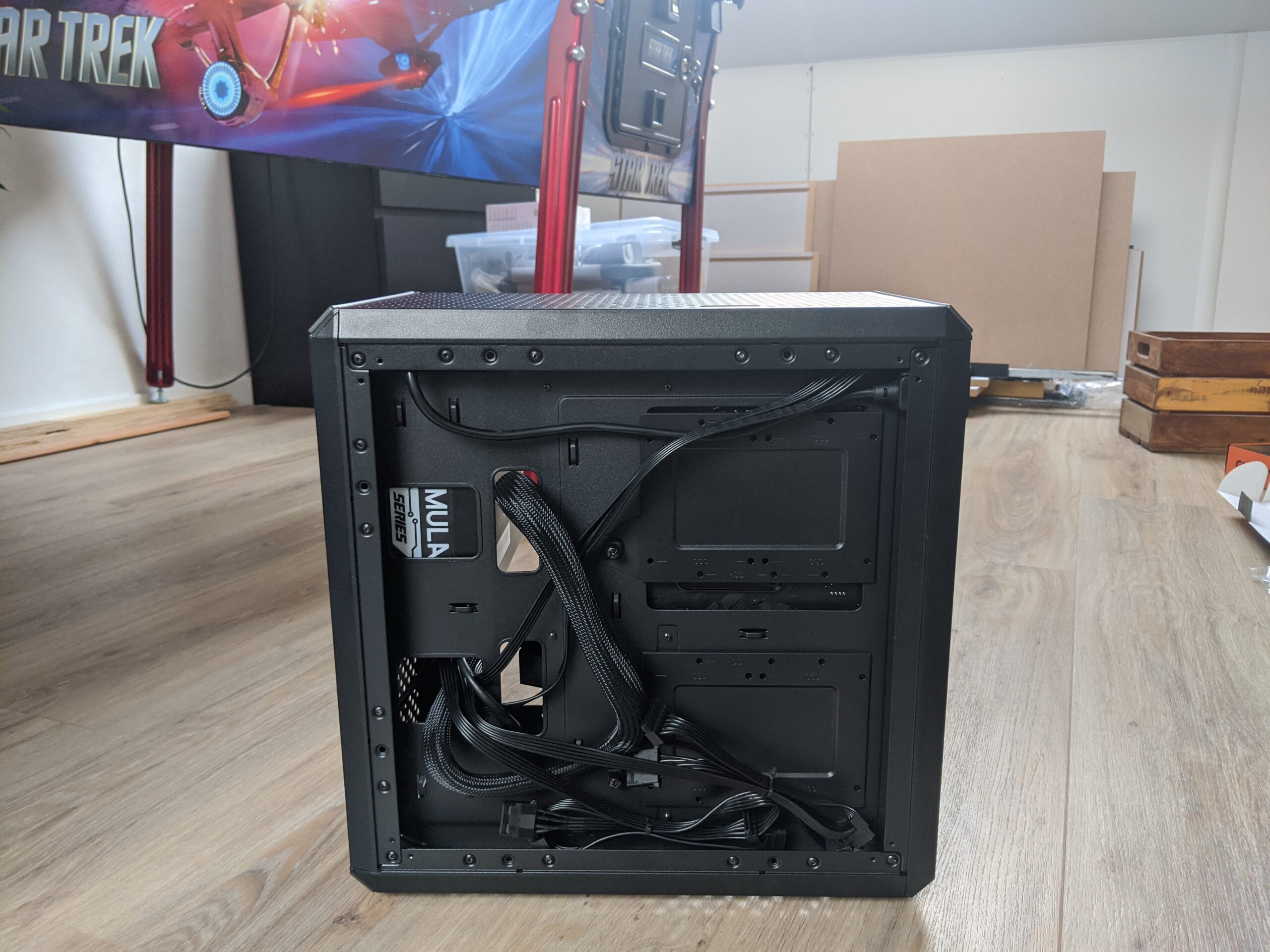 ↪ The computer after rearranging the cables. Yes, that’s a real pinball machine in the back =) 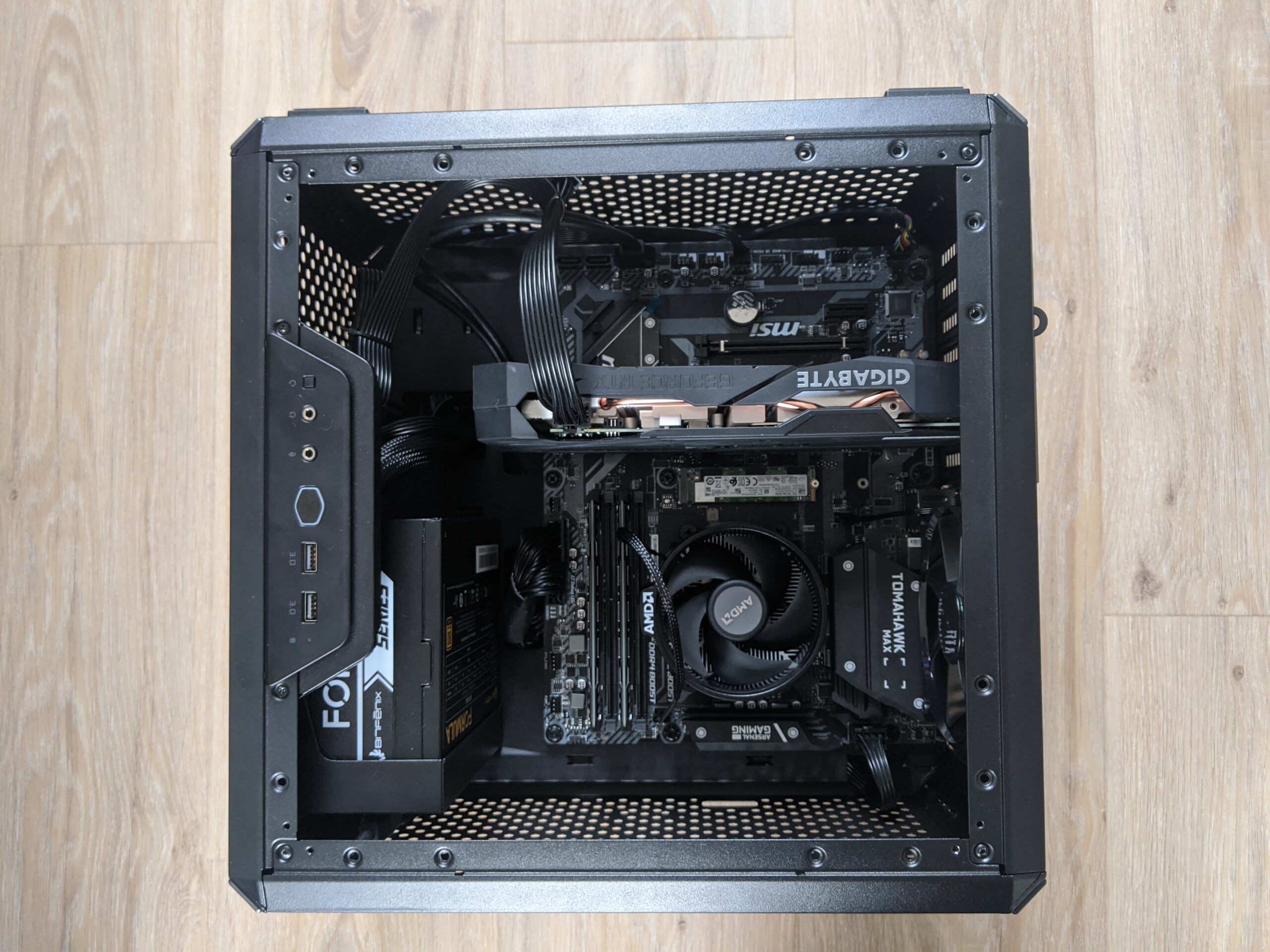 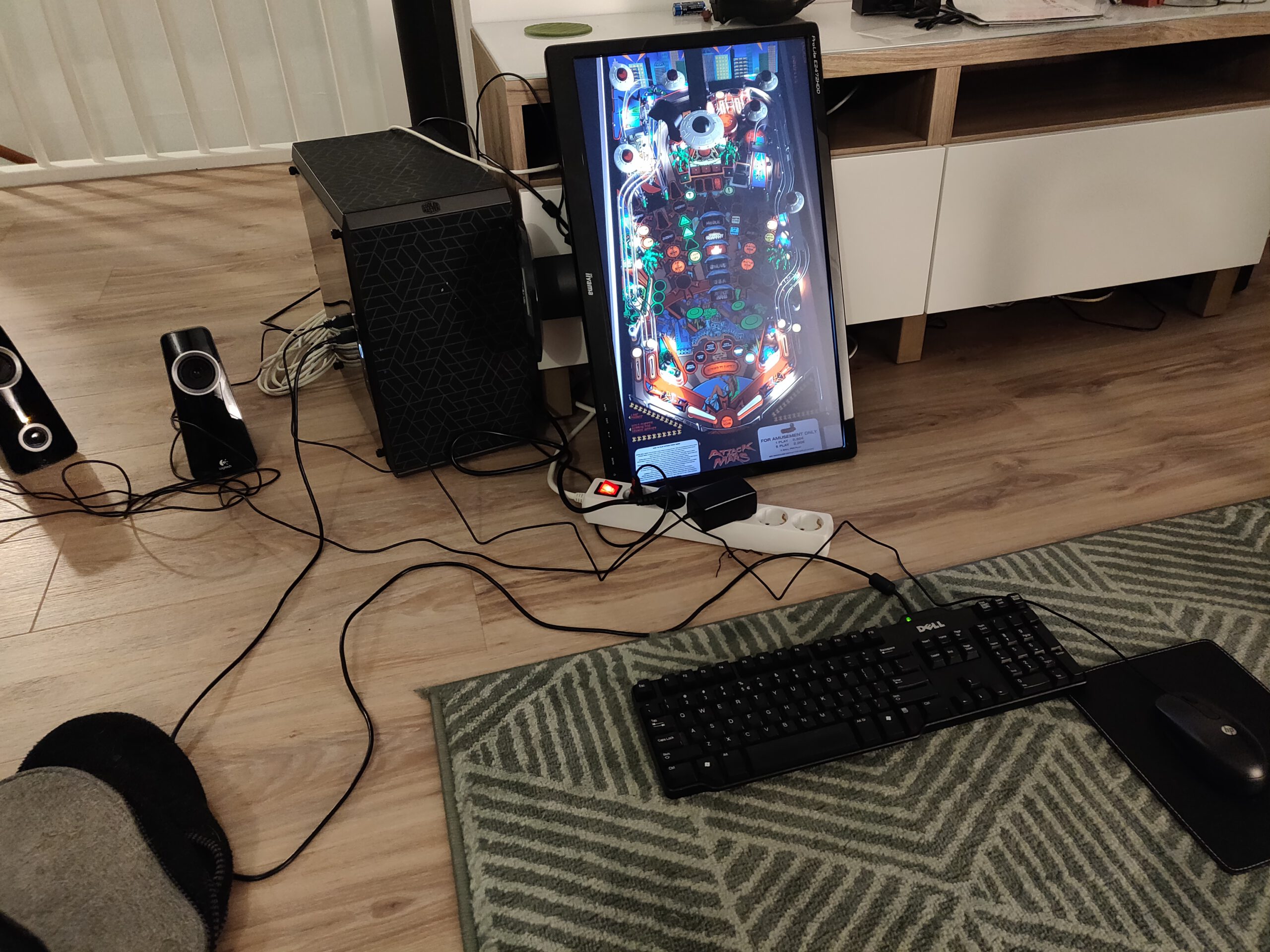 ↪ And a small test setup with VP software.

Now that the PC is up and running it is time to think about what playfield monitor to buy and to continue working on the cabinet.

Now that the MDF is delivered, the next step is to make all the necessary cuts and adjustments before we can start assembling the cabinet. The most important of these cuts is the one on the bottom. The bottom plate of the cabinet is secured by the sides by a so-called flat bottomed groove. We need a router with a straight router bit to make these kind of cuts. 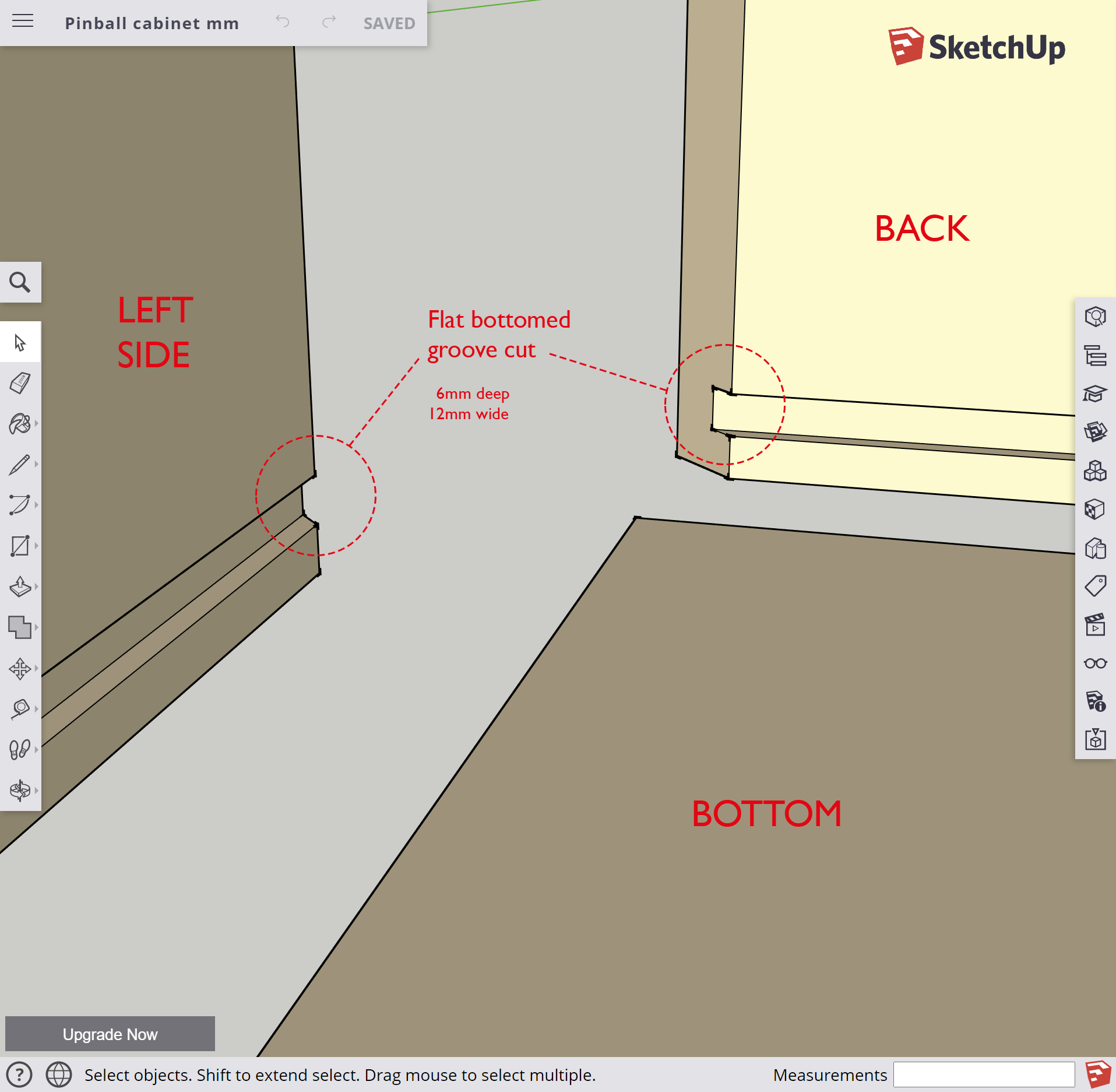 After getting familiar with the new router we bought and after making some test cuts we finally get to be working on the cabinet! A small photo report: 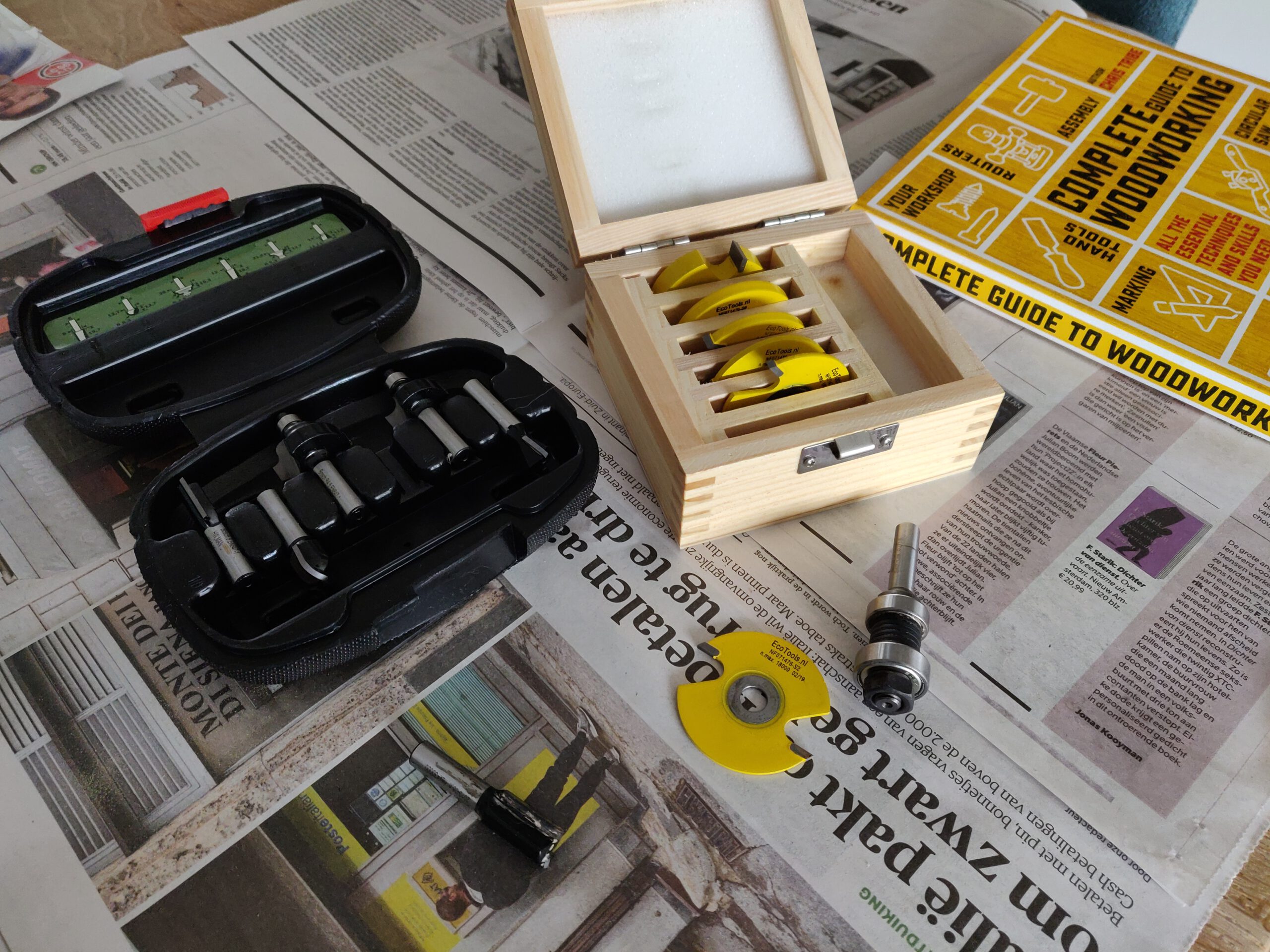 ↪ The router bits we need 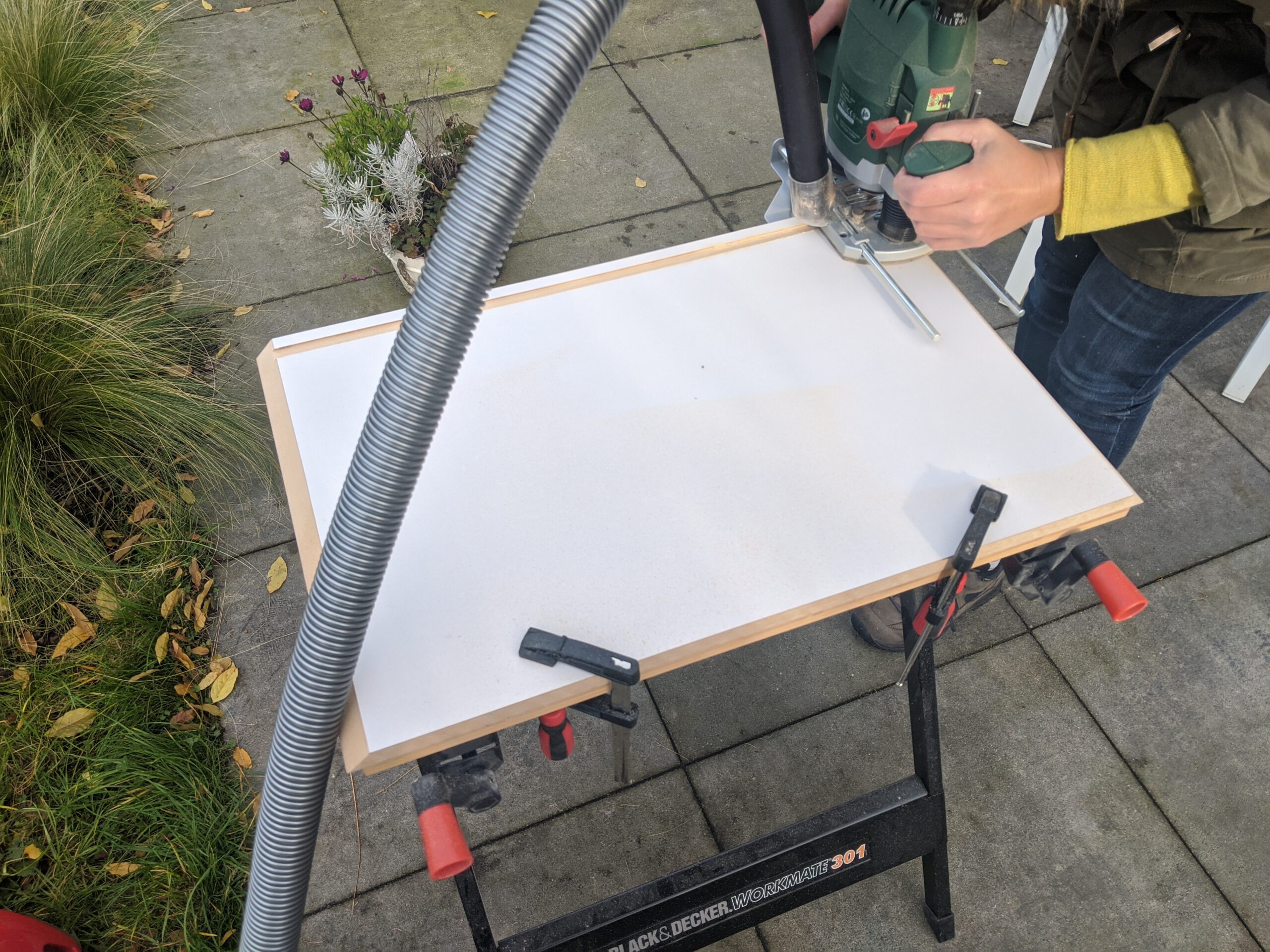 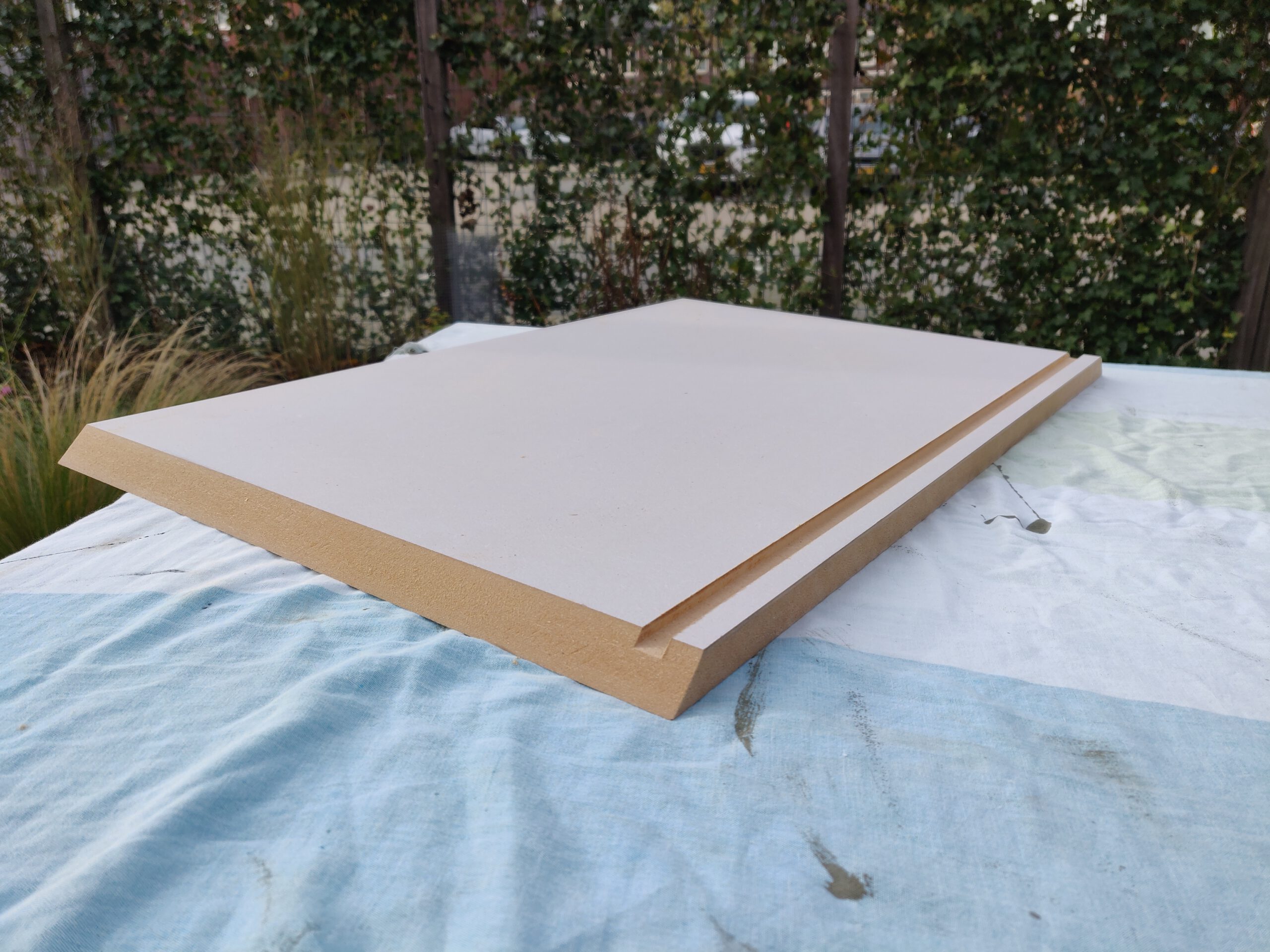 ↪ Close-up of the groove cut 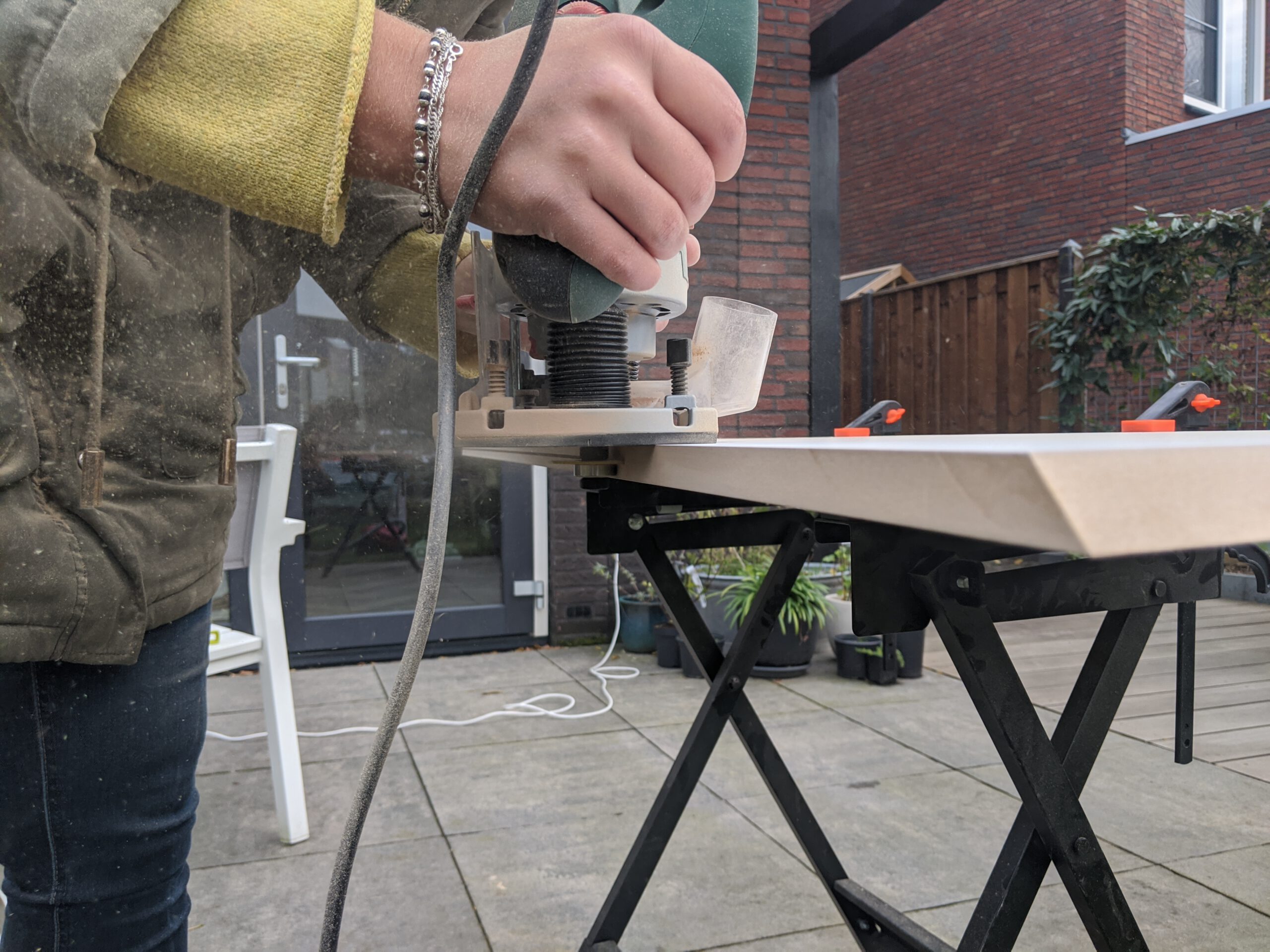 ↪ For the rubbers that hold the playfield glass we need a very small cut. We used a slot cutter bit. 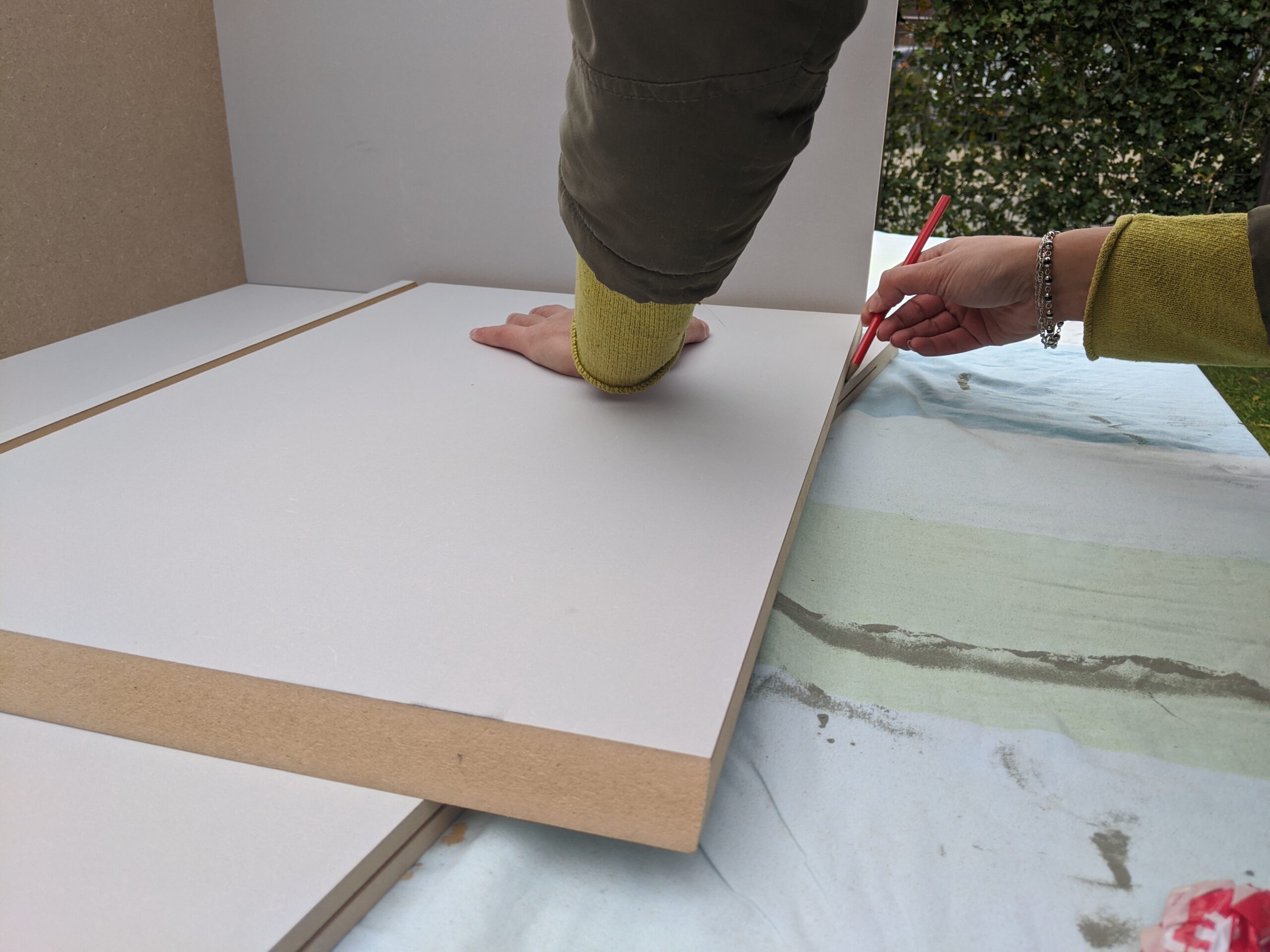 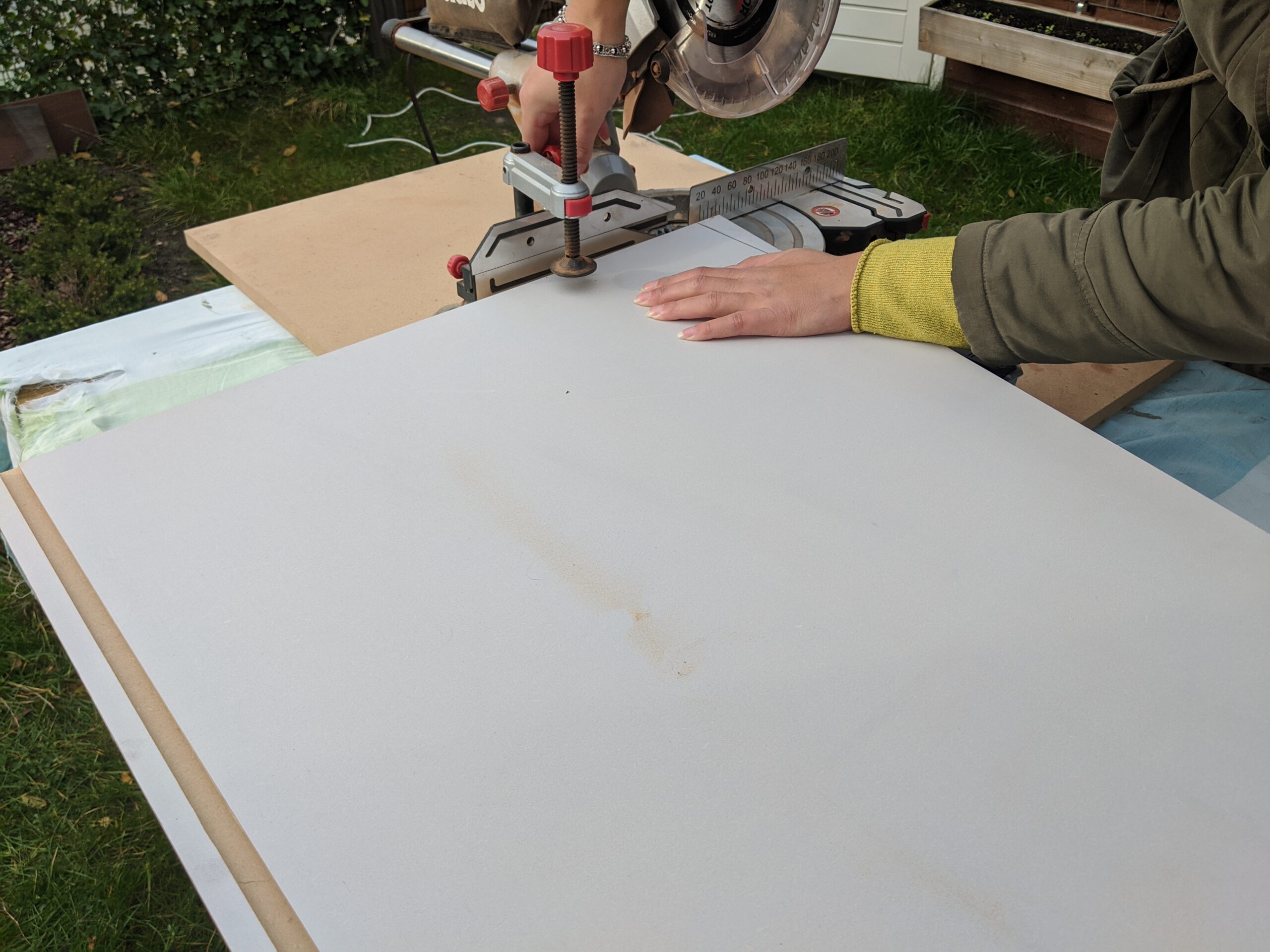 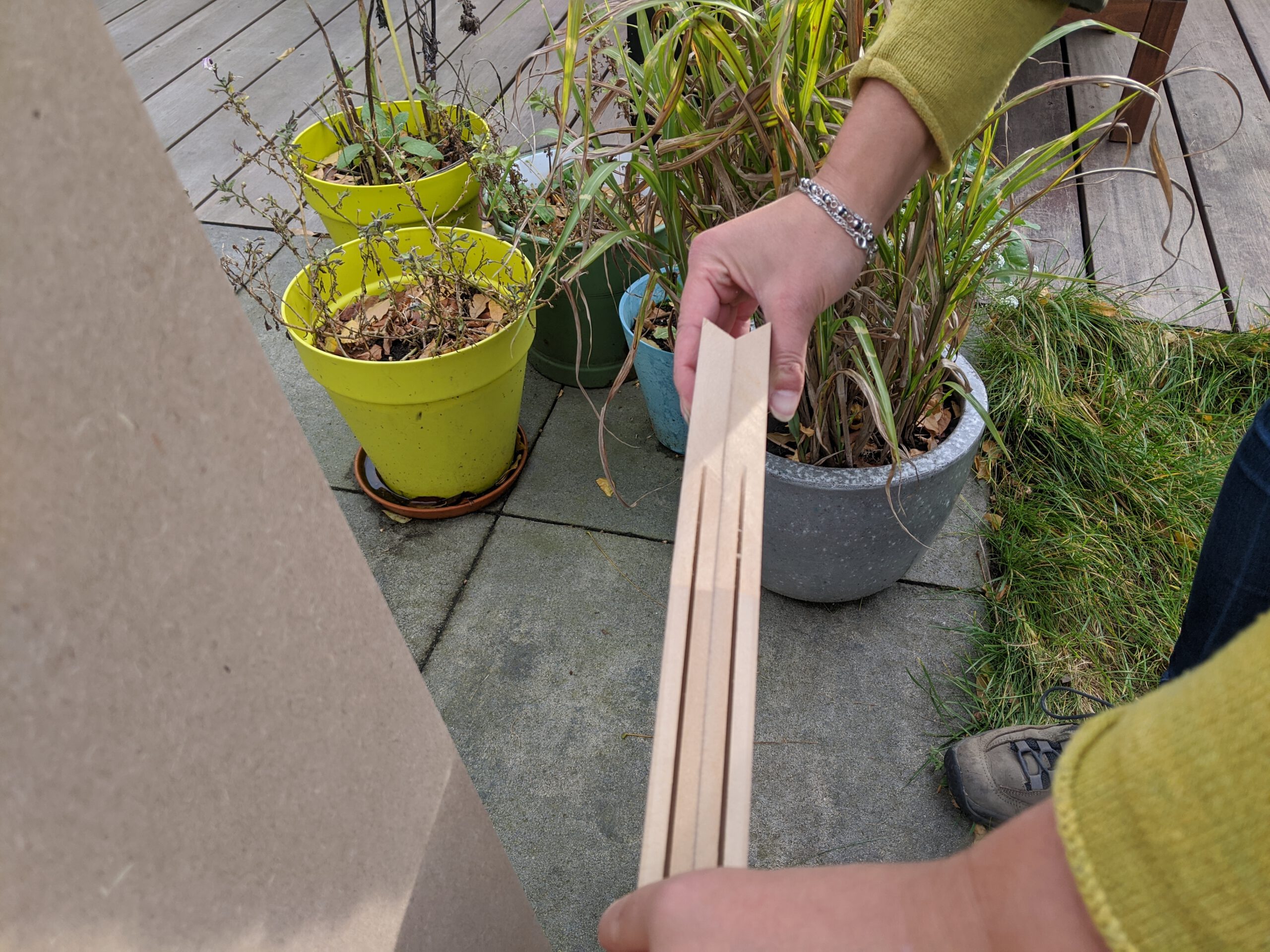 ↪ And the end result

In my last post I wrote about all the considerations I have to make before even starting the project. One of these things is choosing the dimensions of the cabinet. I went with the widebody dimensions Williams used during the 1990s, as this gives me more room for a big playfield screen. The only difficulty with these dimension is the fact that they are in inches. Since hardware shops over here do not sell 3/4″ plywood or MDF I converted the dimensions to millimeters and rounded down to whole mm’s or the next best option. In case of the thickness I went with 18mm.

The drawing plans below show the global dimensions of my pinball cabinet: 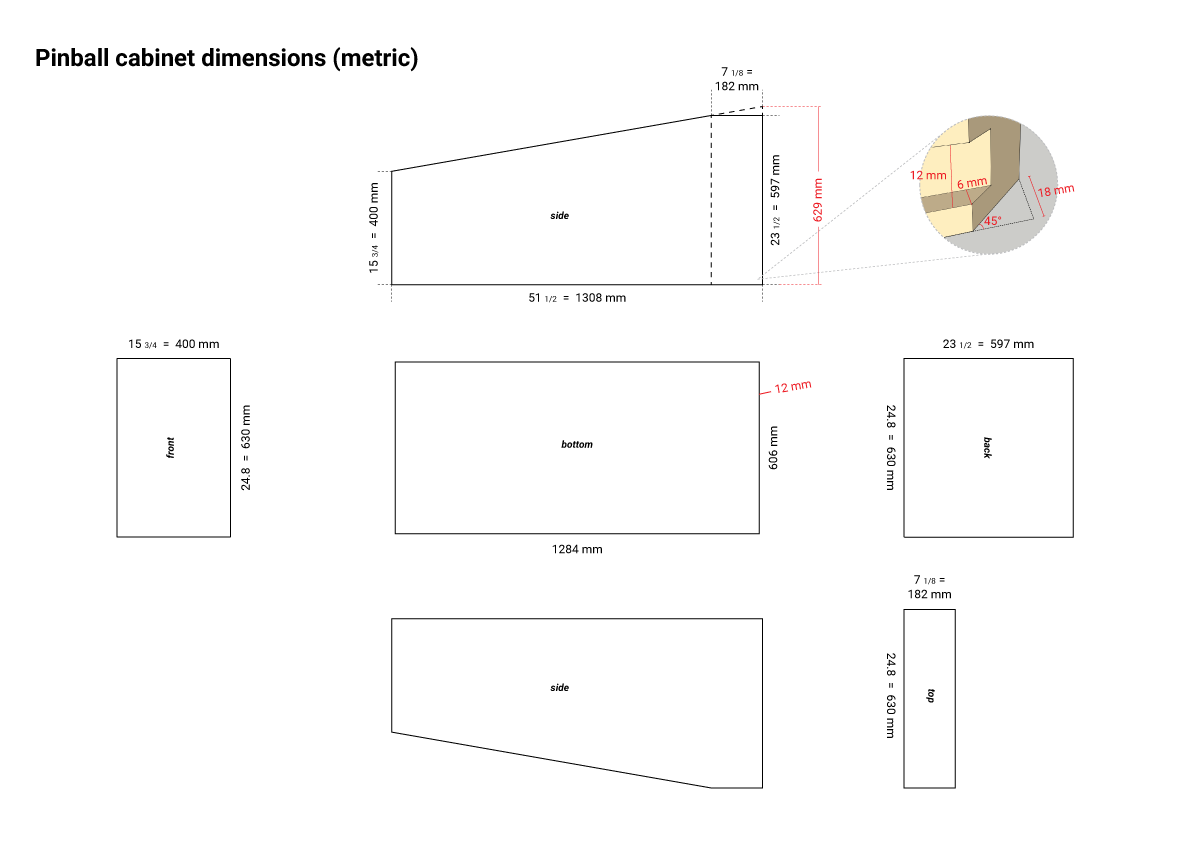 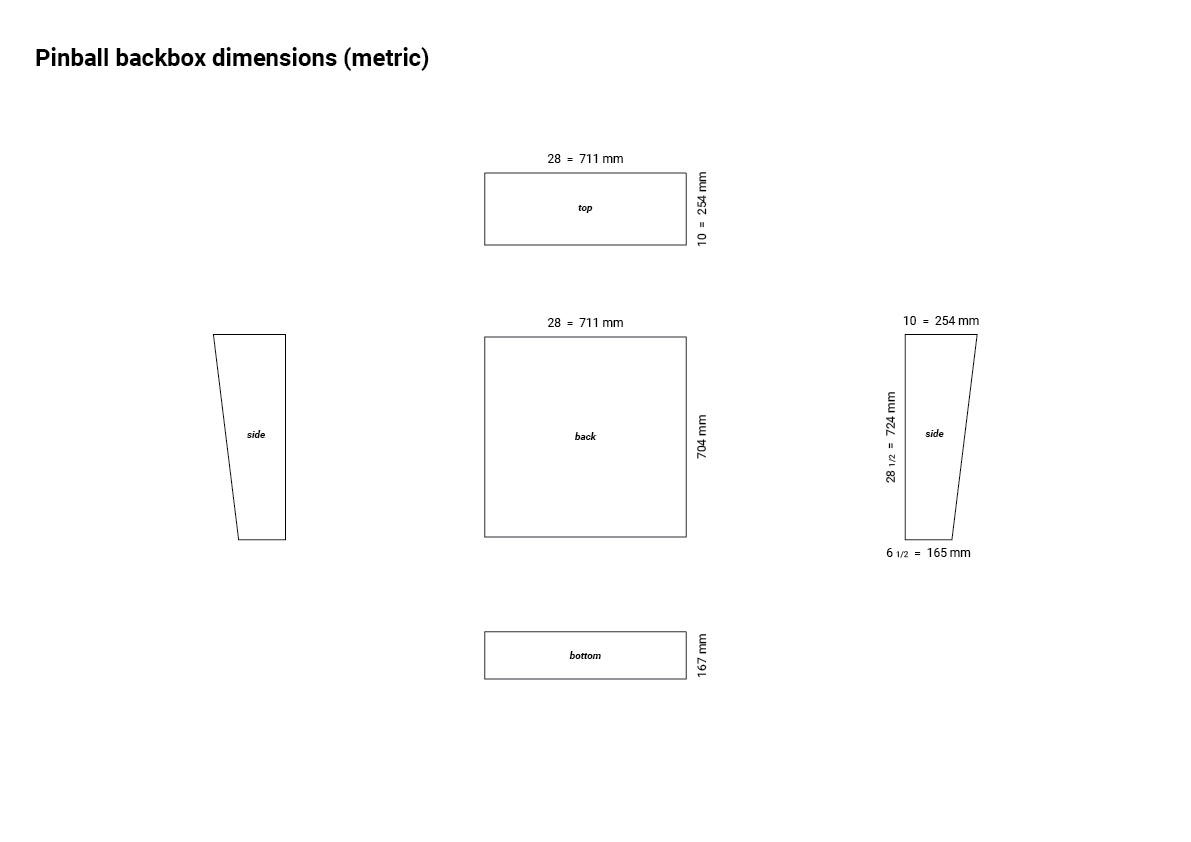 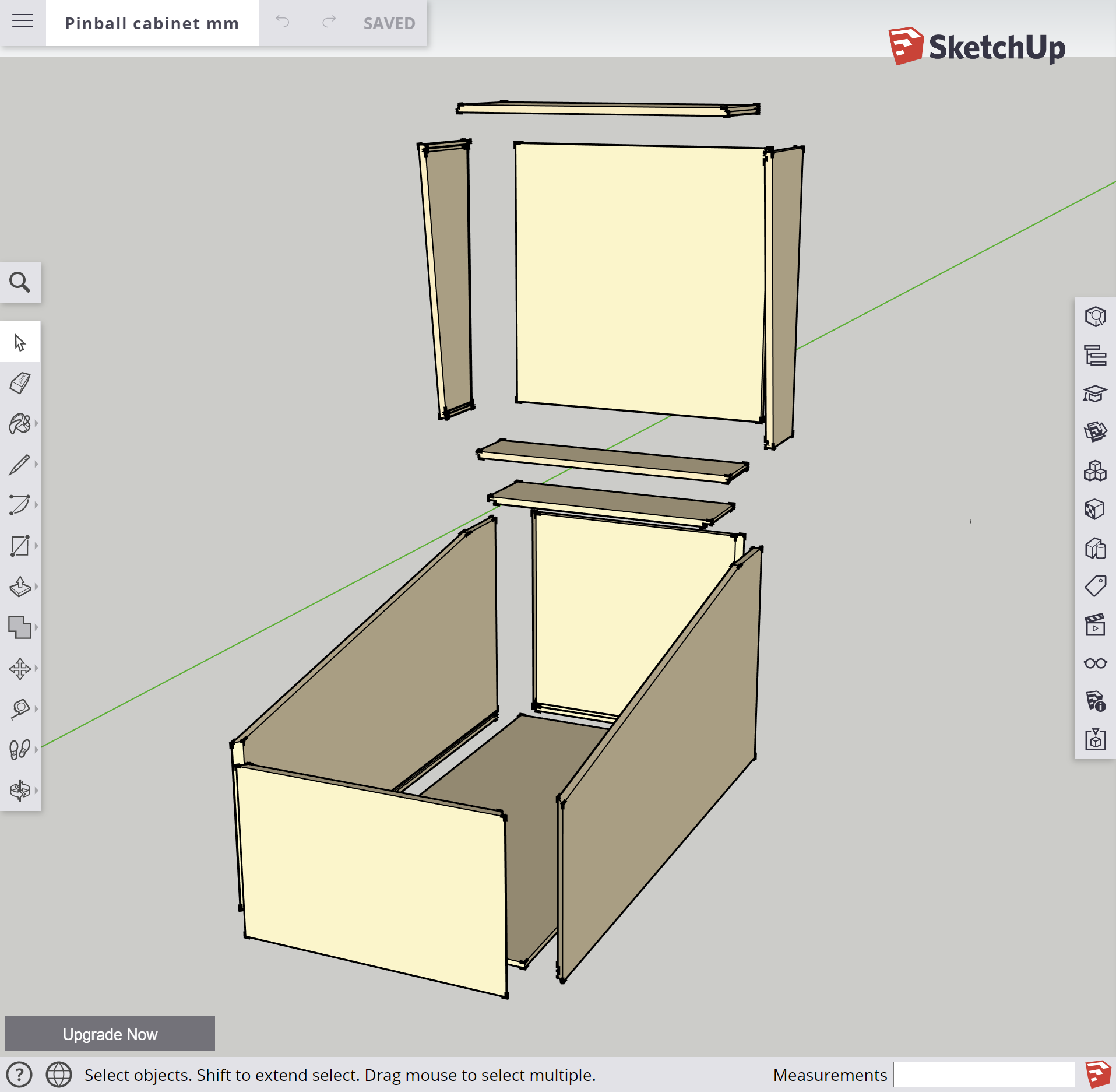 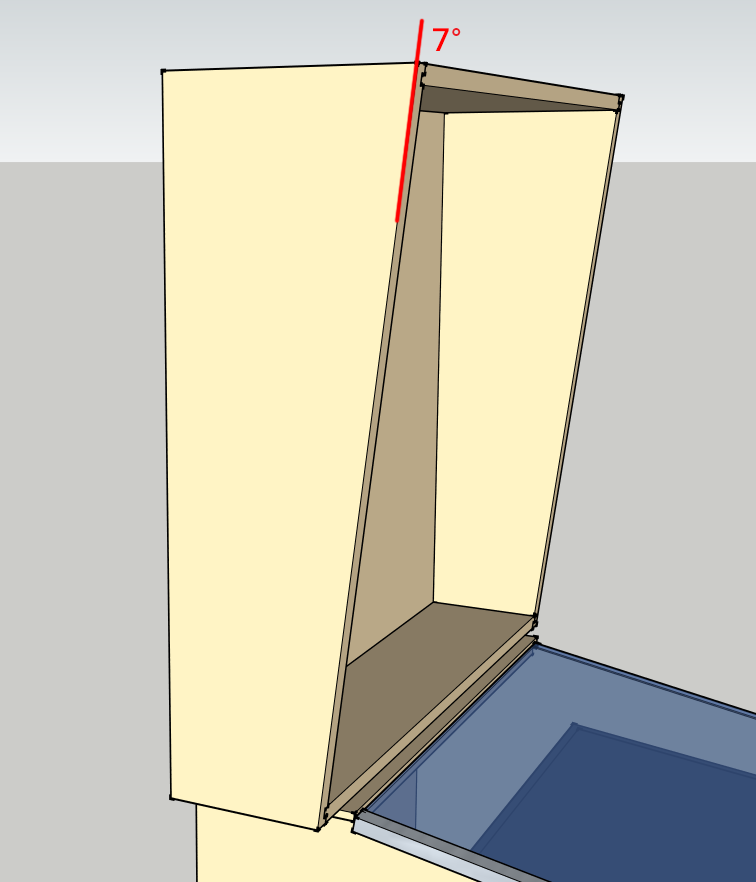 The total costs of the wood were €155, shipping included. Not bad, compared to the price of a pre-assembled kit. Of course, we chose MDF instead of plywood, and we still have to make all the cuts ourselves… but I personally think that should be part of the hobby =)

Other cabinet hardware and materials

Apart from wood I also bought the first “batch” of hardware materials for the cabinet. Side rails, the lockbar mechanism, legs, a coin door, and plastics for guiding the playfield glass. With these materials we can almost start building!

There is a lot to think about if you want to make a virtual pinball cab. There is no such thing as “the” ultimate DIY kit or guide. Fortunately some people can make your life easier. The best thing I came across for example was this Pinscape Build Guide, written by Michael Roberts. It is not just a guide, it’s a whole book in which Michael documents his own cab-building experiences. In more than a hundred chapters he describes the entire creation process, from building the wooden cabinet to installing and customizing the pinball software. By reading this guide I was able to make up my mind about my own wishes and ideas for the virtual pinball cabinet. In the text below you can read about my considerations.

1. The cabinet
I like woodworking and I already know that I want to design and create the cabinet myself. But when you’re not so confident about your own woodworking skills, VirtuaPin offers so-called DIY “flat packs”. These flat packs contain all the parts needed for assembling a wooden cabinet. The parts are made from CNC-cut ¾” (19mm) plywood. All the necessary holes are drilled and cut and customizations can also be made on request. You can choose from Standard Body, Widebody or even Ultra-Widebody versions.

The real challenge will be to convert the dimensions from imperial to metrical. Then, the first “problem” I encounter is that 19mm wood is hard to come by here in the Netherlands. They do sell lots of 18mm wood, so that will be my choice for the thickness. For the bottom and the back of the backbox I will use 12mm. The cabinet will be made out of MDF instead of plywood, mainly to reduce costs.

All of the other dimensions have to be converted as well. For this I want to make some detailed drawings. I will also try to make a 3D model in SketchUp.

2. Playfield monitor
Just as important as the cabinet is the playfield monitor. You can either choose to build a cabinet around the monitor of your choice, or look for a monitor that fits your cabinet. I want the cabinet to resemble a real pinball machine as closely as possible. Therefore I have decided to use the WPC95 Widebody dimensions. Real pinball games using these standard dimensions include Twilight Zone, Star Trek: The Next Generation and Indiana Jones. Choosing widebody means that you will have less “dead space” around your playfield monitor, since the ratio of the playfield is closer to the 16:9 ratio of most monitors.

3. Buttons
Another thing to consider is which buttons I want to include on the machine, apart from the Start button and two flipper buttons. I know that virtual pinball often needs more buttons than real pinball machines do, but I also prefer a minimalistic approach. A summary of my considerations:

Buttons that are nice to have

While reading about the building process I learned that some keyboard encoders actually have a “shift” function that will allow me to add two functions to one button. This way I could add volume controls to the magna save buttons for instance.

5. Other things to consider

Building the heart of the VP cab

Inside the cabinet a Windows 10 PC will be installed: this is the heart of the virtual pinball machine. Depending on the playfield monitor we choose (we are thinking of getting a 43″ 4K monitor) this PC has to be quite powerful. Therefore we will use 16GB of RAM and a powerful GeForce video card. […]