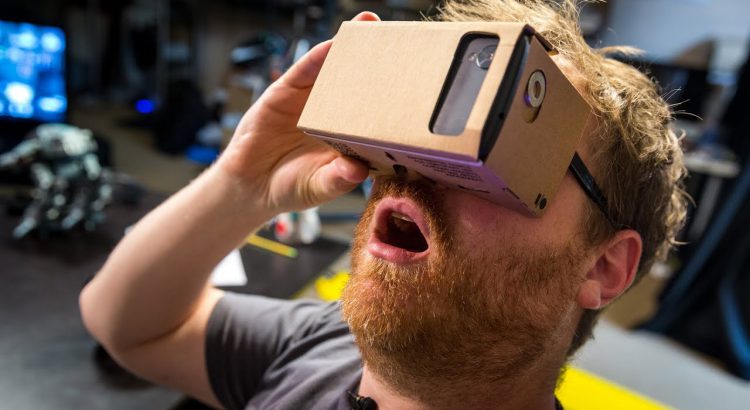 You’ve probably heard about Google Cardboard somewhere or sometime and how you can easily assemble one for yourself. Unfortunately the bigger phones (5,5″ screen and bigger) couldn’t fit the standard ones. Buttons were being pressed by accident, and it just didn’t look very sexy. Of course there were some larger models already on the market, but since I like creating stuff myself I made my own version!

Google Cardboard?
If you don’t know what Google Cardboard is don’t worry, I’ll explain. Maybe you know about Oculus Rift, the Virtual Reality (VR) headset? In essence the Google Cardboard is the same. One difference is that you can create your own Cardboard headset rather easily, and it’s cheap! As the name suggests it is made out of cardboard, which you simply fold. To get it working you just need some small extra parts like lenses, magnets and Velcro. The Google Cardboard app lets you play some demos, but more and more interesting third-party apps and games appear in the Play Store.

Now that you have fully assembled your Cardboard you can start with exploring the various Cardboard compatible apps and download them. Once downloaded just start an app and put your phone into the headset. But wouldn’t it be fun if your phone automatically starts an app upon inserting it into the headset? It is possible […]

Now that you’ve collected the necessary items we can start with assembling the headset. You will need some additional tools though, which are shown in the photo below (click to enlarge):   Step-by-step plan Down here is a step-by-step tutorial on how to cut the headset and assemble it. 1. Prepare the template Print out […]

Before you can start with assembling your own cardboard VR headset you will need to purchase and collect some specific items. I ordered most of the “ingredients” online on websites like Ebay. If you are lucky enough you can find some of the items in a (specialised) hardware store. I would recommend you to collect […]

So, the first thing you need when making a Cardboard VR headset is… well, cardboard! It would also be nice to know how to cut and fold this cardboard. That’s why I created two template files: one A4-sized template and a letter-sized version. You can download the files down below. At the time of creating […]